Posted on February 9, 2017 by ukseahawkers

The 2017 AGM took place this Sunday (Feb 5th 2017) at The Willoughby Arms, Kingston-upon-Thames, London. On the dock was a quick rundown on what was a hugely successful 2016, what is setting up to be an equally effective 2017 and the announcement of a shake up to the size and people on the Chapter’s committee and a few special presentations.

A rundown on the membership numbers was first addressed with 2017 already surpassing the 2016 number. After that it was on to the shape and set up of your 2017 committee.

First off was the presidential re-election. Unopposed and universally supported Mr Sean Wilson will again lead the way in 2017. With that matter of course dealt with it was time to re-assign some roles.

With Sean stepping up midway through 2016 from the VP role, that for 2017 needed to be filled. Melanie Hardman has stepped forward to take that and will work well after a 2016 which saw Melanie manage to raise a impressive amount of money for charity in our former President Ian Smith’s name, honour and memory.

Another role which needed filling was that of Chapter Secretary. Jed Parisi, the secretary for the previous two years has stepped away from the chapter and in his stead Cedric Auchere has happily stepped up. Cedric is already pushing ahead with a members database to aid contact ease from the committee to our paid members.

Other positions were consoldiated with Michael Herring (Membership), Andy Donnelly (Treasurer) and Stuart Court (Comms & Web) all signing on for another year.

Terry Peppard, who will serve 2017 as one of the two Northern reps for the chapter will also stay on the committe for 2017.

With geography still being sorted out, Adam Nathan has stepped forward to be the first London rep for the chapter. Serving the same purpose as other areas, London now has a rep to work on regional meets and communications.

But sadly, one of the South reps Martyn Oppery has stepped away from his role. Massive thanks to him for the effort in trying to get things rolling in the south west.

The AGM was rounded out with a few special presentations; With 2016 and the early remnant of 2017 being a year of change, the chapter President Sean Wilson has seen it the time to begin a new initative. The initative being the awarding of life memberships to those who have been long-standing members or who have worked exemplary to boost the name of the chapter through Charity work or other work worth rewarding.

These life memberships were handed out by Sean Wilson, so here is his thouights on the who and why:

Chris and Paula A’Bear had been a part of the original committee since the 2004 inception. They have been heavily involved alongside many others through that infancy up until 2016. They are relinquishing their roles for 2017 due to work commitments but remain excited to see how the group develops and expands. This seemed the most approrpiate way of showing our appreciation for all of their hard work. 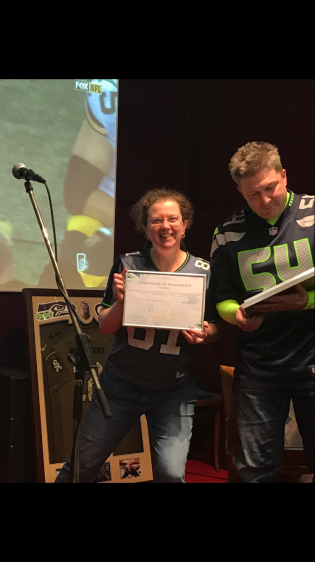 Melanie Hardman was awarded a lifetime membership due to her fantastic work on the charity front in 2016 for the chapters nominated charities (around £5,000 at last count) and all of that work and the appreciation for it seemed a great fit for this. 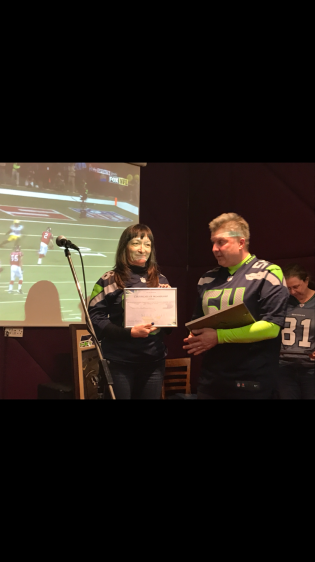 Lastly, we have awarded Ian Robert Smith it posthumously due to all the work in laying the foundations for what we see in 2017. He is missed heartily by everyone who crossed his path and so many owe their position and friendships by the work he did in spreading the UK Seahawks gospel. This on the night was presented on his family’s behalf to April Hardman.

One other presentation saw Midlands rep James Keay present a hand-crafted original and rare brickwork to Melanie and April. The work handed to James by chapter member Lenny Sap was handed over before the AGM and is a design of the Seahawks logo. A very unique and cool gift from one Seahawker to another. Great work Len!

For more intricate details, the minutes of the AGM will be sent out in the coming days. For announcements on the 2017 National Meet, the 2017 nominated charity and much more, keep an eye on this website in the coming days and weeks for all that!

Congrats to all those nominated to the committee and a massive thanks of appreciation to all of those who attended!

This entry was posted in Chapter News. Bookmark the permalink.